This page still can cover up a lot. If you feel we missed something, please tell us in the comments.
The date format is (Month)-(Day) (The year is in the headings)

Green is active staff, White is new user(non), Blue (when alongside a current or former mod) is demoted user, Pink is for bots(pre-2020), Discord Blue is for bots(mid-2020 onward) and all other colored words are level-related ranks. All of these are related to the reputation of the user in relation to the timeline.

The very next day, April 1st (April 2nd in some countries), every single channel was typed upside down, some of the text people sent was upside down, people's names were upside down... Even the picture of the server was upside down. The banner went from a cute little christmas banner to a burning hell with a starver saying "help me". To build even more the chaos, omer sayed in #announcements "¿uʍop ǝpᴉsdn pɹoɔsᴉp sᴉ ʎɥʍ ɟʇʍ". There was also the "eogito gang" and the "omer gang". The eogito gang was growing fast, but all the mods (except for eogito, which for obvious reasons went to the eogito gang and Skalem and ZenChi, who are inactive mods) went with the omer gang.

As the final event in April Fools, a new channel made specially for this event would be created: #moderator-boss. It would have different mods and the LapaBot against eachother. You could either damage or defend a boss. 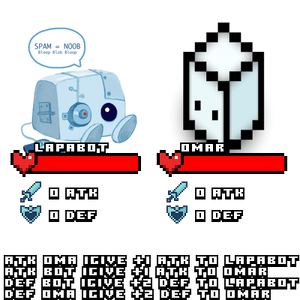 Retrieved from "https://starveiopro.fandom.com/wiki/Starve.io_History?oldid=26725"
Community content is available under CC-BY-SA unless otherwise noted.