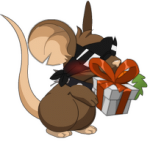 I am a seasoned player of Starve.io, and a proud editor of this wikia.

I usually play on the Tokyo 3 server (although if there are around 50 players I will go to the server with the least amount of players), and currently still go by Newbie. Will probably change nickname eventually. I am usually a peaceful player, and will not attack until provoked (or not at all...). I am now trying out other playing styles, starting with Every Team For Themselves: aka you have a partner and kill people who try to invade your base.

Note: I've officially stopped playing starve.io because of said stupid a-holes, and also because... no, actually it's just the stupid a-holes. This means I will no longer be active on this wiki, since if I don't play, then most of things aside from typos I edit will most likely be wrong.

You can find me playing several other io games such as rusher.io as Spearha, brutal.io as Fling, puble.io as FITE ME or deeeep.io (Mostly on Pearl Defense only) as Space Unicornz. Good bye, starveiopro wiki. I loved watching you grow from only 7 pages to over 100. Goodbye.

Retrieved from "https://starveiopro.fandom.com/wiki/User:Hildahwwong?oldid=9596"
Community content is available under CC-BY-SA unless otherwise noted.